Disability is no inability; Moha acquires a new prothesis hand

Mohamed Mulushaga (Moha) is the Students coordinator. He lives with savere disability, having lost both his hands in a fire accident at the age of 8. The fire was caused by a kerosene tin lamp in their family one roomed house in the Eastern City of Dire Dawa, Ethiopia.

Due to lack of proper medical intervention at the local hospital, he was referred to Addis but it was too late as both his hands had to be amputated. He stayed in hospital for several months and his poor parents had no way to take care of him ,so they abandoned him at the Hospital. 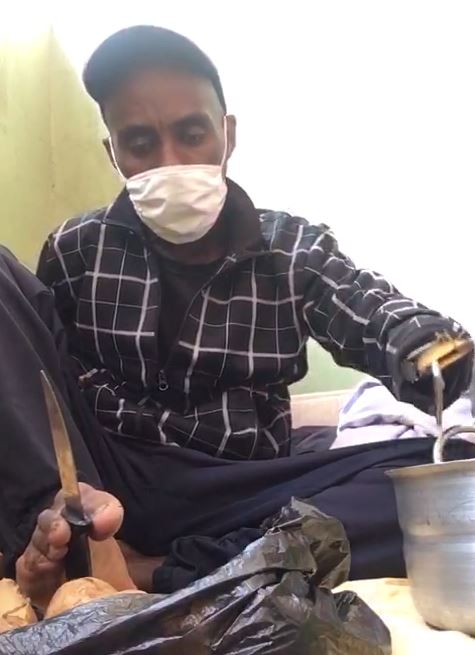 It took a missionary run orphanage, Mother Teresa to take him. In this orphanage Moha spent years. He studied and qualified to join the University where he took a Bachelors degree in English Linguistics. Mohammed had out- grown the orphanage and after his graduation he tried to move out, live and survive independently but he got a rude shock when all the landlords could not accept him because if his physical disability. Without a job and no shelter, he started to live in the streets from where, Mr.Terfa Dinka who runs a Seniors rescue Center in the middle of the city met him.

Terfa took him unconditionally. He for a simple bed but most importantly, a shelter and an easier way to survive with his condition.

Our Messay the PBF trustee in Ethiopia met Moha at the VDI center and shared with us his plight and wish to continue his studies st Masters level. We immediately took him up. We went further to give him responsibility to be responsible for the other students we support in Ethiopia.

Moha is happy to stay with the Seniors. He volunteers to help with the daily chores and helps Terfa with office work. His self confidence has improved abundantly and Moha has become more open and is happy to share his life, his struggles and successes to motivate others and especially those living with severe disability.

Apart from his classwork , Moha is s volunteer tutor at the Mother Teresa orphanage and school. For PBF, he is our student coordinator countrywide.