HISTORY OF SRILANKAN MISSION OF PBF – a short survey

Missions never mushroom on their own, spontaneously. It is always founded on a vision. The founder of Dr. Peter Bachmann Foundation (registered in Sri Lanka) is a Swiss humanitarian. His first visit to Srilanka (Ceylon) 1964 was of a providential nature. He who traveled by boat from South India (Danushkody) to this fair island was attracted by the scenic beauty of the country as well as the incredible sense of hospitality of its people. During his brief stay here he made friends with so many people as well as he saw the needs of the people of this country in various perspectives. 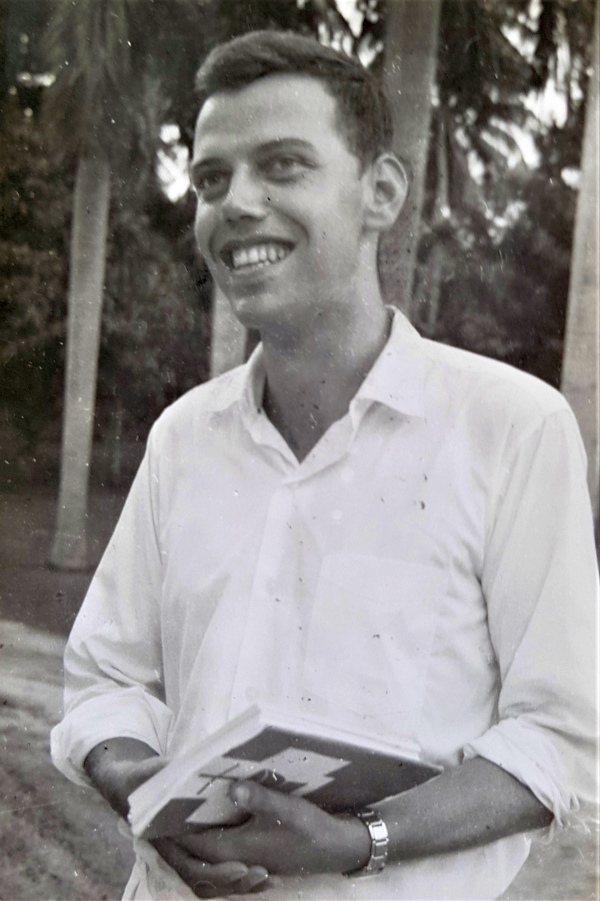 This was the seed that germinates his vision for his mission in Srilanka. He gave priority to the housing for roofless. He initiated it with few people of his choice of Srilankan contacts. In the case of a philanthropist it so happens, that he has a sixth sense to identify the poverty and helplessness of his fellow men instinctively. Thus, Peter Bachmann launched his philanthropic and compassionate project of building houses to the shelterless. His pioneering co-worker was Fr. Joseph Tissera. Such was the humble beginning of tiny step of a great man, who later made a giant leap to so many other projects to meet the needs of the people in this fair isle.

Housing occupied his heart’s first place. Prior to joining Fr. Tissera, he initiated a housing project with Chandra Fernando at Obeysekara Pura in Colombo. With Fr. Tissera he did a very successful housing project in Dummalasuriya in Kurunegala district. While continuing the housing project, he too ventured to assist financially the university students who found it difficult to continue their University education due to economic hardships and to assist the poor people financially to buy their medication. These two projects were also as meritorious as housing. Housing project that first started from Obeysekara Pura and then Dummalasuriya, soon took its wings to other parts of Srilanka, such as Galgamuwa, Wanathavilluwa, Kekirawa, Karuwalagasweva and Manuwangama in Chilaw.

A beautiful holiday resort of the same Foundation built by the seaside of the southern ocean, later handed over to the Salesian Congregation to run a hotel school for the economically marginalized children of the vicinity. Peter Bachmann’s vision and the mission was not restricted only to the poor, with the lapse of time, he decided to start a very special service to the very special children.

THE SERVICES FOR THE SLOW LEARNERS

An old comrade of Peter Mr. Susantha Katukurunda played a very special role in this wonderful project. With the funding of Kiwanis club in Zurich, a beautiful training center was built in Chilaw and Nicholas Nanayakkara was appointed as the first director. This was completely a different service among the services initiated by Dr Peter. Mentally slow children were trained in literacy, numeracy, animal husbandry, and horticulture and simultaneously they were trained and motivated for independent living. Not only the children but also the parents of these children benefitted much by this project. As the foundation decided to become independent economically of this project Nicholas Nanayakkara in consultation with Dr. Peter has handed over the same service to the Jesuit congregation in Srilanka. This pithy account of Peter’s tireless mission in Srilanka, brings me to its conclusion.

There is an apt saying in English; instead of giving a man a fish daily without charge, if you teach him to fish, he will learn a trade for a living and live an independent life. I presume it is true of Dr. Peter’s projects.

He helps people not to be slaves but to be free and independent people. This I attest with experiential proof as a co-worker of Peter. The most positive and optimistic perspective of his vision is to help people to stand on their own feet with whatever help he gives. This is true of his housing projects. People have built on the house Peter has built and the houses look so beautiful. Same with the slow learners’ education center in Chilaw; he started and he helped now it is in the management of a local religious congregation for its future survival. I believe the ultimate aim of a project is to educate, motivate, encourage and animate the beneficiary to take over the project from where its founder stops. Such continuity will not only keep the project viable but that is the greatest tribute and joy to its founder. This also I must state, though Dr. Peter worked tirelessly and very hard in fundraising for these projects, he also had the bad share of pain from people who were not in his mindset of liberating people. But the beauty of it and true of a genuine philanthropist is such hard experiences never stop him from the genuine vision of liberating people from their existential needs. It is the true image of the true and genuine nature of a great philanthropist and a humanist. As a concluding note let me add this comment; miracles take place today through Jesus like men like Peter, but we failed to see such as miracles as we are blinded by social work, name creating and popularity. Let Peter and his Foundation be a living example for those who serve and hope to serve the needy and the poor.