Siege of Lalibela on 5 August – some letters

The unfortunate events in Lalibela on Thursday 5 August have deeply shaken many of our closest staff on the ground. Some of them summarised their feelings in some personal thoughts, which we are happy to pass on here in sequence.

On Thursday, Beatrice Gill from the Canton of Berne was the first to write to us. She wrote:

Zewdu called me yesterday morning. He was out of breath and excited. We only had a brief connection. Zewdu told me: The Tigray rebels came to Lalibela that night and he, his sister Nezaneth, and the residents of Lalibela all ran away and fled. Only the old have stayed behind. Young men have also been shot.

Zewdu lost his sister on the run and in the excitement was also not aware of where he was, could then say in the direction of Imrahan Christos. He doesn’t know what to do.

It affects me very much, not only because of Zewdu, also because of all the people from Lalibela that I know and don’t know, because I myself was in Lalibela for a long time.

I am worried about my mother and my sisters. Yesterday, I got my sisters on the phone and they told me the situation. They told me this sad news by losing their hope. They leave the town and went into our relatives in rural.

People, the young girls and females were leaving their homes and went to rural and forests by afraid of the invaders.

My home is my everything, the rock-hewn churches are endangered. They are all in the hand of invader’s, we all lost our home, our church, our blessing. Nothing more Sadness I got in my life than this situation.

However, there is no information today, since the government already blocked the network. I didn’t know how my mother and sisters are.

I am terrified about my family. The only thing I did here in Addis is praying. God may save my families and Churches.

I know holy Lalibela churches since my primary school lesson since my child age. As primary school students, we used to draw these Rock-Hewn Churches on paper or make a design with local materials. St. George church was among those which I know from my early drawing classes when in grade four 20 years ago. Since then, I got a strong impression to visit this holy place.

Since 2012, I got the opportunity to visit Lalibela with the help of PBF, I never forget that place, I sat just adjacent to St. George’s church and had meditation for a couple of hours, I gave honor and respect to the hands that made it.  I was wondering how people who lived in the 12th century in a small village got the idea of building churches just from a single rock? Lalibela is not a big city, it is just a town with only an estimated 18 thousand residences by 2007. King Lalibela built these churches when the world was in the ‘dark age’ the period between the downfall of the roman empire and the birth of the renaissance. However, Lalibela was a shining star of the world during this dark age from north-central Ethiopia. It is simply amazing to see such unusual wonders made by King Lalibela by his creativity and enlightenment in the holy town of Ethiopia 900 years ago.

Present-day, thousands of local and international tourists are being lured by this holy site after UNESCO registration as a world heritage. It is indeed national pride and heritage for all Ethiopians for Africans too. As a tourism center, It remains a source of livelihood for many local people and a source of income to the national economy.

The ongoing conflict particularly in northern Ethiopia has threatened this holiday place. The last Thursday’s (5th August 2021) report of control of this holy site by the TPLF rebellion worries so many people, particularly those who have a spiritual connection to this place.   The disastrous and looting behavior of this insurgency group is feared to destroy the spiritual and historic properties of the site. I am deeply concerned! I pray and hope this will not happen. Abel

A sacred place becomes a battlefield. I am deeply saddened to announce that the most sacred and famous site for us, the UNESCO World Heritage Site, has been under the control of the Tigray rebels and terrorist groups since Thursday afternoon.

The terror groups have attacked different parts of Amhara and Afar region after one of the spokesman of the rebel group said, “We have a plan to pact with Amhara political elites and destroy Ethiopia” and he said this by rejecting the bilateral ceasefire agreement with the central government and the rebels continue to obstruct any humanitarian aid and targeted innocent people to take revenge on Amhara elites.

At the moment, the TPLF terrorists control the historical sites in Lalibela. The majority of the innocent population has been displaced to nearby areas in the countryside, including my dear family. There is no access to transport to get to another town. I am deeply concerned for the innocent civilians and the rock churches. I have not heard from my relatives since the rebels took control of the town.

The terrorist groups are looting centuries-old artifacts, holy crosses and manuscripts from the church and kidnapping priests and deacons who guarded the churches. They are also looting government institutions, hotels and banks.

I call on the international community, regardless of borders, religion, ethnicity and political differences, to act immediately to save the churches of Lalibela and innocent lives, to condemn the heinous acts of the TPLF terrorist groups and to provide rapid humanitarian assistance to those in need. 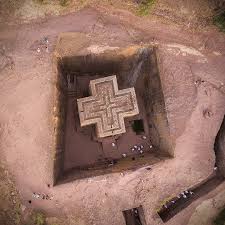