Beatrice Gill has shaped the history of PBF in Lalibela from its beginning until today. This is shown in her report from spring 2010

Beatrice Gill has shaped the development of PBF in Ethiopia like no other person from Switzerland. Two days ago she became a grandmother for the eighth time. We congratulate her from the bottom of our heart. 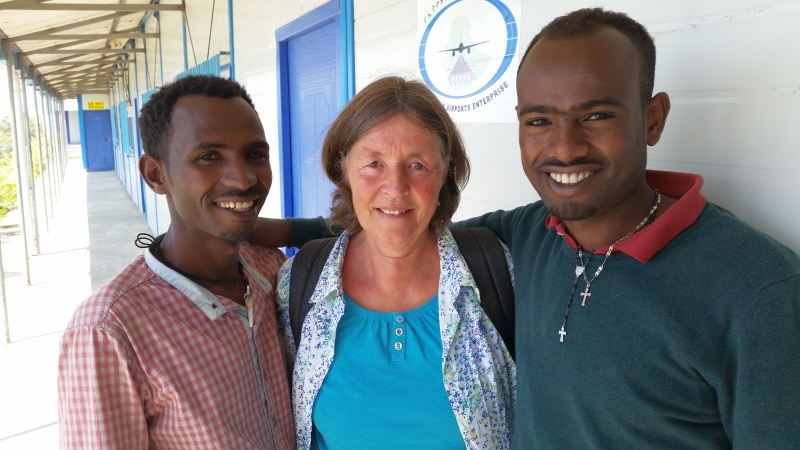 Ten years ago, Beatrice wrote the following report on the (then actual) website about her work in Lalibela. For the more than 25 years of PBF’s history in 2020, Beatrice’s outstanding and lasting commitment is unprecedented. Thanks to some knowledge of the Ethiopian language, Amharic, she has created a lively circle of friends in Ethiopia. In addition, she has accompanied the work of PBF in Western Uganda with her knowledge of African medicinal plants, especially Artemisia, to this day. Thank you, Beatrice!

This year I was only able to go to Ethiopia for a short time. During this time I visited Lalibela and found out how the projects of the foundation in which I was involved developed.

Something has changed fundamentally in Lalibela itself. The water pipes are now completed, so most people there now have water every day. This influences our Artemisia project (see May 2008) in a very positive way.

Several people, mainly involved in the project, now plant Artemisia Annua in their own small home garden. They are advised and guided by Abebe, the pharmacist. He has primary responsibility for this project.

Abebe himself moved to another house with a large garden, where his small family found accommodation and where the pharmacy was also located – in a central location. For the first time, Abebe has enough space to grow Artemisia Annua and other medicinal plants herself. Other medicinal herbs and tomatoes grow between its plants.

I am pleased that this project has become independent of the foundation and my work!

As everywhere, there are positive developments as well as setbacks. Nevertheless, what has started can lead to a good course.

Karate is unfortunately no longer offered because the karate teacher has left Lalibela. But Mesfin, who organized it, doesn’t give up. Sooner or later he is convinced to bring martial arts back to Lalibela. In the meantime, he has enough to do with the children’s circus that has grown. Around 50 new children take part, some in traditional dance, others in acrobatics.

Some old women died, others were allowed to take us in. I have noticed that the women who have been supported for a long time are in much better health and have more strength. For example, some have made simple racks so that their cooking utensils are no longer on the floor. Others have taken in a child, it helps them and receives food and accommodation. The child can now go to school again.

Setata, who can only sit on the edge of the bed because of stiff joints, now helps herself with the cooking.

Ataru used to earn her life collecting wood and is happy to be able to weave baskets.

The foundation always works for individual people. She helps with medical problems, gives start-ups for a small business, pays rents and supports young people during school and training.

Here are a few examples:

Adugna is fine. The foundation’s start-up aid enabled it to open a small shop two years ago. In the meantime, it has created a secure basis. She now regularly attends the ninth grade.

Fanta, who had an artificial colon, died. The foundation now supports her son, who was left alone.

Arsubalev is no longer in Lalibela. The little shoeshine boy, who we brought back from Woldiya last time and financed him a “belly shop” (report June 2009) has now looked for his luck in the big city. He did good business in Lalibela at the time and went to Woldiya with his own money.

Zewde, the mother of two boys, who learned to walk again after being confined to bed for five years, has been given the chance to have her tennis ball-sized tumor operated on her neck. Unfortunately, her facial nerve was cut and the optic nerve damaged during the operation. She is now blind in one eye and one half of her face is paralyzed. After months in Addis Ababa she is back in Lalibela and has to learn to accept this new situation. Her sons give her strength, as do her neighbors, who also welcome her. The positive thing about her situation is that her lung disease is well controlled with medication.

Tesfaye, who was partially paralyzed after a car accident, now lives in Addis Ababa. He can go again. He does need a stick and limps a bit. But he is overjoyed. He is now trying to get some money from the insurance company because he was not responsible for the accident.

Assefa has moved out of his corrugated iron box and has given up his job as a security guard in the bar district. He has found a small quiet place to stay with a family and is going back to school. He still doesn’t have a mattress and sleeps on the floor – but that doesn’t bother him.

Fanta was seriously ill last year, goes back to the market and sells tomatoes.

Haftamu found a small job. He takes care of the shoes that everyone has to take off when entering the church.

Netzanet has turned a room in her home into a small tea house. In addition to tea, she offers homemade bread from a solar oven.

At the end of my stay in Ethiopia I was again in Bukama, in the south, in Woleita. (Report March 2009)

I visited the clinic there, which is run by local Catholic sisters. In my understanding as a nurse, it is almost unbelievable that this clinic has a catchment area for 40,000 people. There is no doctor there and hardly any medication or bandages.

The fate of many women suffering from a uterine prolapse like Abeba is close to me again. Half of your uterus has been outside your body for five years. It is not ignited at the moment. The sisters taught her how to take care of them. Ababa has two children and was abandoned by her husband. She is one of the poorest in the area because she can hardly work. She suffers from anemia and still has malaria …

Ababa is just one of hundreds of women with this fate. Since there is no health insurance in Ethiopia, every hospital stay must be paid for yourself. Surgery is unaffordable for Ababa like most women there. The financing of surgeries is a goal with high priority, the financing could be secured for a few surgeries (330 CHF per patient).

The artemia plants that I brought last year have grown and been harvested. But with the multiplication it did not work. The sisters assured me that they would try again.

Back in Switzerland, many memories remain: dismay, respect, thoughtfulness and also joy.