Lalibela was captured by the invading TPLF rebel group on August 5, 2021. The federal government security forces retreated for unknown reasons on August 4, 2021 at 2 pm. The town community, administration and a segment of the population, mainly the youth fled the town for the coutryside and the other cities to avoid any confrontation with the occupying rebel forces. The severity of the problem is vast and complex. Since it was winter in Ethiopia, the rural community had planted all the grain in the and kept their only a little for the subsistence and survival. The food security situation has deteriorated further with an exodus from the town to the rural has depleted the little the farmers kept for survival.

As the crisis unfolds, the situation is getting worse! The invading TPLF forces are raping young girls and women, looting farms, robbing merchants and killing young people whom they perceive to be threat.

Hundreds of people are walking hundreds of kilometers on foot to escape. Most have no specific destination except to escape the atrocities! 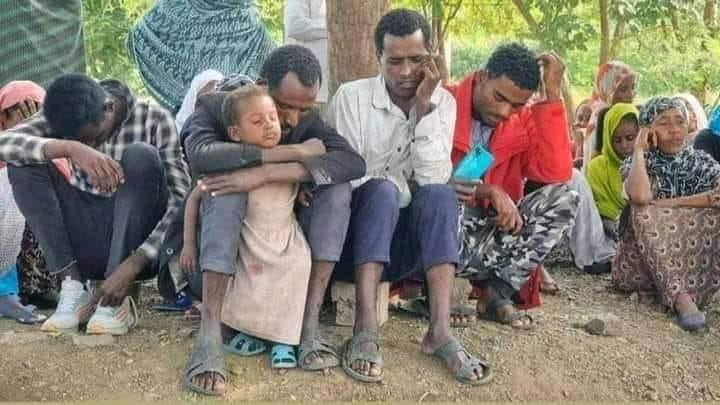 Several people from Lalibela have arrived in the nearby towns of Bahir dar, Dessie and even the Capital City Addis Ababa.

From the personal testimony and eye-witness account of the PBF representatives, Abebe and  Messay who had escaped to Addis Ababa and have recently revisited Bahirdar dar to check on our people.

There  thousands of internaly displaced (IDPs) from Lalibela and surrounding areas including most of which are children and women who have walked more than 350 kilometers on foot.

The most suprising thing is that so far no one including the international has come to the aid of the people who have entered Bahir dar from the Northern Wollo and Lalibela and of course Lalibela is still under blockade and we do not know the fate of the people trapped there. It us unfortunate that the governmental or international aid agency has reached Lalibela and its environs. The Red Cross and the World Food Program (WFP), which provided emergency assistance to the Tigray region 1 week after the start of the war in Tigray last November, have no plans to enter Lalibela and its environs 12 weeks and counting! The silence of governments and the world is shocking!

The effects of the crisis are far-reaching and long-lasting, and it is clear that the population is  condemned to genocide. If international community takes no immediate action, it will make a historic mistake in this century for mankind.