Locust cause hunger strife in the Horn of Africa.

Chaffe is a small settlement area in Oromiya region nearer to Diredawa, East Ethiopia. The local population are small scale crop farmers but they are predominantly livestock keepers of goats,sheep and cows. PBF supports this area by funding students from poor households to get education in the local primary schools as well as those who qualify to join tertiary colleges and universities.

Through the local priest, Fr Yohanes Haile who has worked in the area for several years, PBF donated a community Posho Mill, (Millstone) which served them for 10 years. The mill broke down last year and we replaced it for them with a much stronger model that was opened in April this year. During the opening ceremony, the locals were of course happy for the new mill but there was no grains to grind because swarms of locust which swept through the Horn of African countries of Ethiopia,Eritrea, Djibouti and Kenya left the crop and livestock farmers in this region in a major famine.

The community made a request to the PBF team that visited the area for the opening of the mill, for emergency food Aid to special groups affected by hunger, the old and children.

A total of 200 families(1600 people) have got this emergency aid. Fe Haile coordinated the exercise and shared with us at PBF the fotos here depicting people collecting food with their donkeys, carts and others carrying to relief on their backs. 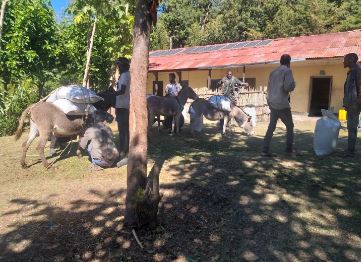 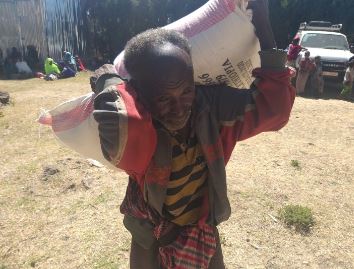