Lalibela is a town in the Lasta district of the North Wollo Zone in the Amhara region, Ethiopia, at about 2,500 metres above sea level. It is famous for its monolithic rock-hewn churches, but the site is very important for the ancient, medieval and later civilisations of Ethiopia.

Destination of the pilgrimage routes
After Axum, Lalibela is one of the holiest cities in Ethiopia as a place of pilgrimage. A pilgrimage is a journey, often to a still unknown, foreign place. People embark on a search for meaning in life, new experiences with God, also with nature. These life journeys lead to new meanings about one’s own humanity. After returning, the pilgrim takes these insights with him into his everyday life.

Christian Lalibela
Ethiopia adopted Christianity very early, in the first half of the 4th century. The historical roots are said to go back to the time of the apostles.  The churches themselves date from the 7th to 13th centuries and are traditionally dated to the reign of King Gebre Mesqel Lalibela (l1181-1221). Churches and their names denote the “New Jerusalem”. The site is hailed as the “eighth wonder of the world”. Millions of Ethiopians had visited Lalibela as pilgrims over the centuries and its importance grows daily. Since 1978, the site has been listed as a Unesco cultural heritage site because of its rock-hewn churches. 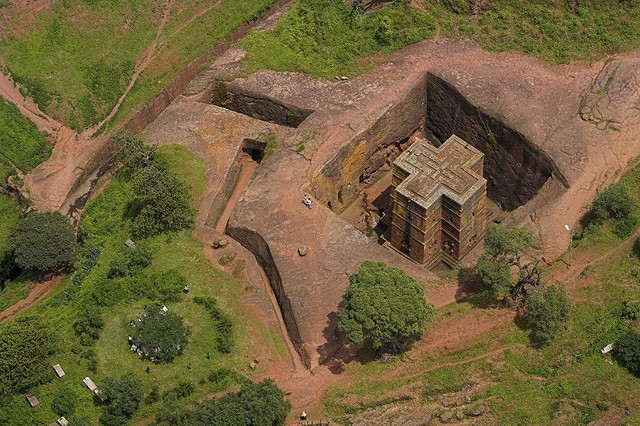 The Amanuel Pilgrims Village of our foundation
We have reported about it on our website before and described its purpose. The new project, started by locals in cooperation with and financial support from PBF, aims to preserve the unique significance of Lalibela as a place of pilgrimage. The site has been a symbol of the meeting of culture and religion for almost a millennium. Pilgrimage is an archetypal symbol of human experience, of the journey character of one’s life. People from near and far, locals and foreigners visit Lalibela as pilgrims and tourists, probably also with the desire to get to know the everyday life, the peculiarities, hardships and hopes of the local population and to learn from each other.

For PBF, the encounter has an extraordinary value and is part of the motivation for this project. It is made possible by our local responsible, the engineer Messay Mekuanant. A local team is assisting him to create a truly spiritual place. Also for ecumenical perspective, new ways and hopes may be shown, which also moves the very traditionalist local church understanding.  Our conviction that the whole of creation is endowed with a kind of pilgrimage commits us to this action. People will go out of their way to share their experiences of the journey, which go far beyond the exchange of tourist information. They may each in their own way contribute their – also economic – possibilities. The accommodation is deliberately modest, but also inviting for discerning tourists. Solidarity and sustainability are of particular importance. We will report on details in due course.

PBF faces great tasks in Lalibela. The foundation has been active there for 16 years, and from the beginning with the guiding principle that although King Lalibela had unique, admirable churches built for the inhabitants, the people were left to fend for themselves in poverty and a daily struggle for survival. This is where PBF sees its mission and task. Pilgrimage, exploring paths already has to do with risk in terms of language.