Self-help: Whoever encounters Warkaw Destaw will continue on their own path with strength

He was very special to me since 2010, this small, extremely lively Warkaw! He was involved with Getachew, the person in charge in the first years of PBF, with the honey project. That was my first encounter with him. Today, Mesay writes, he is a very strong, committed adult who is always striving for change. Mesay remembers how much the busy Warkaw tried to change his life, he sold used clothes on the street.

Hans-Peter Hutter was also impressed when he wrote about Warkaw, the street vendor, during his visit in 2012:
“Lalibela, the small town on the northern plateau of Ethiopia, is not only an attraction for tourists because of its impressive churches carved into the rock, but also the centre of an extensive mountain region. Every week, never-ending crowds of people move along the dusty roads into the town to the market with their donkeys and cows, their wood collected by hand and now carried on their backs or with their own harvested bee honey.

In this small town, which is slowly awakening from thousands of years of sleep by tourism, many locals have started to open a small shop on the street to sell what they have or can produce themselves, such as food, goods for daily use or souvenirs. There are already numerous shops along the street, which essentially consist of a small container where the goods for sale are stored, displayed and also sold immediately.
Warkaw is also on the main road through Lalibela this morning, which leads to the stone-built churches and the market. He is a bright young man in green trousers with triple-folded pants and also greenish plastic sandals, a grey T-shirt, which he wears under a worn trainer jacket. Under his arm he is holding a bundle of freshly cut wooden plugs in a green plastic bag. In his hand he is holding a square metal pin with which he prepares the plugs before selling them, so that they can be used for the care of the teeth, which obviously works very well considering the dazzling white teeth of most Ethiopians
.
Next to him Warkaw has set up a chair and a water bucket, where a passer-by cleans his white sneakers for a small fee. On the other side Warkaw has a wooden shelf covered with a plastic foil. On it there are some clothes, cloths and a few socks on display and offered for sale. Wakaw got these cheaply in Addis and is now trying to sell them here on the plastic sheet.

A small poster, which Warkaw has put up behind him on the street wall, promises that you can make phone calls here. For this purpose Warkaw has a mobile phone in his left hand with which people passing by can make their phone calls for a fee. Many Ethiopians cannot afford their own mobile phone and there are hardly any public telephones. For them, Warkaw is the only opportunity to contact distant relatives and acquaintances quickly.
Warkaw shows how with imagination and business acumen a business can be run with practically nothing. He is now supported by the PBF with a container that will serve him as a warehouse and sales room.”

A few years ago Warkaw started to clean a very neglected, waste-laden parking lot. Some vegetables are now growing there. Today Mesay realizes that there are very few people in Lalibela who have such a strong and purposeful work mentality as Warkaw. He had to stop the low yielding vegetable cultivation after two years, because the income was too low for the minimum subsistence. He kept the land and thought about a new use.

Warkaw does not just sit back and do nothing. Today he works at the reception desk of a guesthouse belonging to the Orthodox Church. There he receives 36 Fr (1200 Birr) per month. He is now married and has two daughters. His wife worked as a cleaning lady in a hotel, but when the second child came, the hotel owner dismissed her. 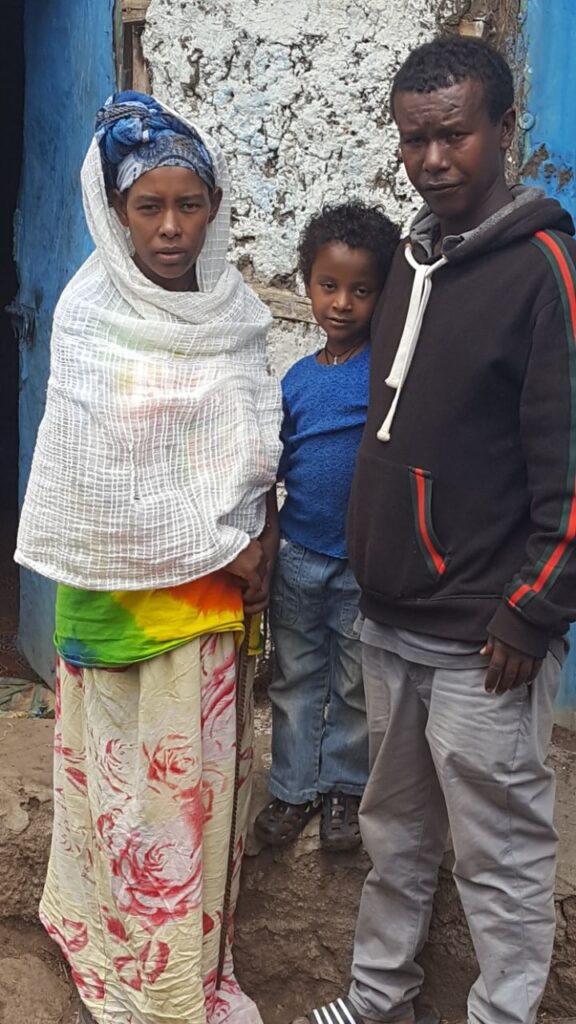 Warkaw has the vision to use the small piece he cultivates again, perhaps for a snack bar which is open in the morning and in the evening. In this place this should be a good business. His courage, original willpower and positive attitude are unbroken.