For this year’s Christmas, the Ethiopian poet Solomon Molla has set a big goal. For fifteen years he has been writing poems that reflect his difficult life and his thoughts on life in his country in strong images. The response to his poetry from friends and acquaintances is good and encouraging, but to reach a larger audience you need a real book! That costs money, and which publisher is already willing to finance a volume of poetry? Solomon Molla tried crowd funding in his own way. 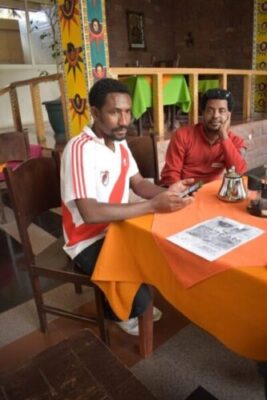 He began to collect money among his acquaintances with the promise that the donor would receive a special gift for this year’s Genna, the Christmas celebration of the Orthodox Church on January 6: a copy of the first publication of his poems.

During our visit last October, we met Solomon Molla, a strong, confident man in his forties. He read us some of his poems, in Amharic, of course, we understood little or no word, but were fascinated by the fire of his lecture and the magical sound of the language. And what our companion Messay translated in abbreviated form let us suspect that we were facing a great poet. In the meantime, one of the poems has also been translated into German.

Solomon Molla is married and has a five-year-old daughter. He earns his living as a government official, but the meager wages are not enough for his own house. He lives with his family in his mother’s house in Lalibela, the well-known place of pilgrimage with its famous rock churches.

As a young man, Solomon became a soldier and fought Eritrea in two wars. His left leg was seriously injured by several bullets. It was only after ten years that he was able to leave the military and return to civilian life. He began studying sociology at the University of Addis Ababa, which he graduated six years ago.

Just two months ago, it seemed more than questionable whether Solomon could raise the money to print his poems by the appointed date. Many donations had been received, but it was not enough to print a book. Solomon was desperate. It would be a disaster if he had to disappoint his friends and donors. He was afraid to stand before them as a thief and fraud.

But with the help of the Peter Bachmann Foundation, it was practically possible to raise the missing amount at the last moment. This not only made a poet happy, but also made an important contribution to the literature of this country, which is still rich in talent but poor in money.