A different trip to Addis Ababa and Lalibela

Our third trip through Ethiopia should be different. A few years ago, with our daughter Noëmi, we got to know the north with its unique mountain landscape and its historic sights, on our second trip the Rift Valley in the south with its lakes and nature reserves. This time we wanted to put another focus. Not like tourists jumping from sightseeing to sightseeing, but staying in one place for longer, talking to people and learning more about them and their lives. That was our goal.

A few weeks before we left we met Peter Bachmann from Winterthur – just the right person for our request. For more than twenty years, his foundation has supported aid and development projects, especially in Ethiopia. He and his local staff are immediately ready to lead us to people and places where the Peter Bachmann Foundation (PBF) gives people in need, but also young people hungry for education, a new life perspective.

In the midst of glass-walled office towers, which are now shooting high in Addis Ababa, there is an older house from another time. Terfa Dinka, a friendly man with dark glasses and a slightly too big suit, has devoted his life to feeding the poor. Together with his team, he runs a feeding center for homeless elderly people who no longer have anyone: the Institut Voluntas Dei (VDI). Half a dozen women and a little over thirty men wait in the courtyard of the former parish house until the bell rings, and they get their daily Injera in the two dining rooms. 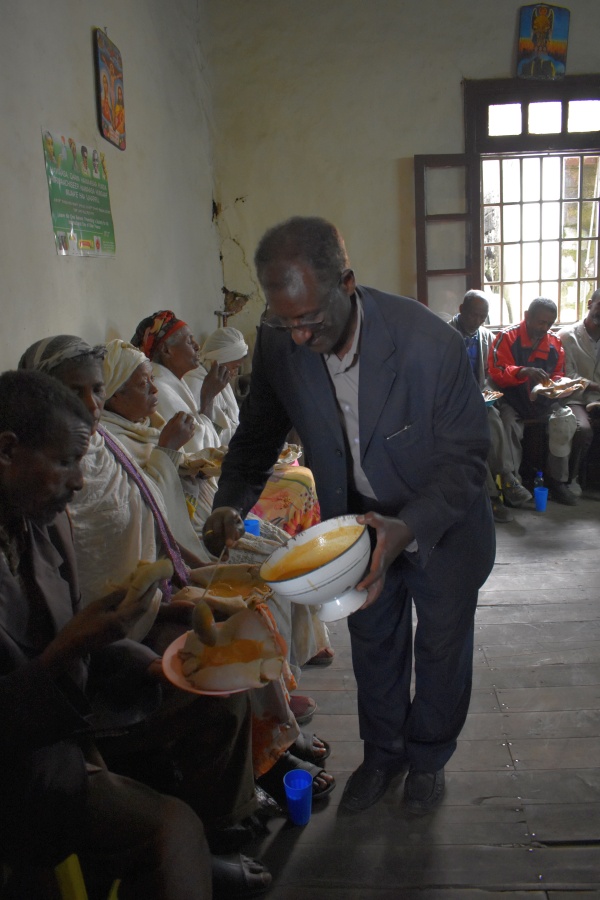 A roll of flatbread and a big spoon of thin chickpea sauce. We are impressed by the quiet, almost devout mood that reigns here; And because we are embarrassed to just watch people eating, we are glad we can help bring them the meal. For some, there are also beds where they can spend the night, and for all a body care and cleaning facilities. Of course, there are thousands of people in Addis who need such support. Terfa Dinka would be glad if he did not have to reject people every day. The monthly CHF 2000, with which the PBF Foundation can support the VDI, is not enough for more.

A school for the little ones

At the edge of the huge city is the Day Care, a day school for children between four and six years, including a kindergarten, but here is not played, but read, written, learned, even English vocabulary – and of course also sung. 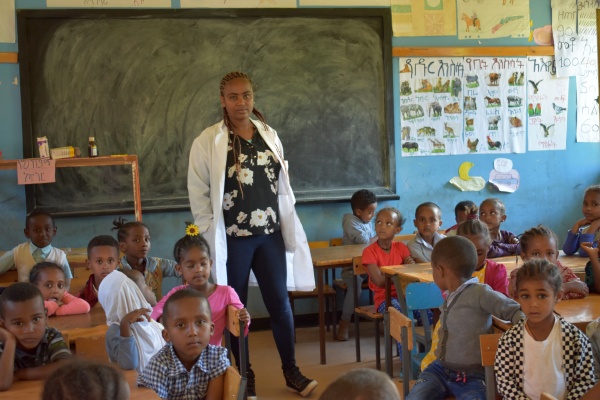 The parents of these children are very poor and could at best afford a public school. But they are far away, and up to a hundred students are often taught there by a teacher. Day care has been provided for over fifteen years by the Pro Kind Foundation. Headmaster Kinfi Tareke leads us visibly through the three classrooms in which two teachers teach about thirty-five children. Almost luxury compared to some state schools, where up to eighty children are taught together, but luxury is far from day care.

There is a shortage of furniture, money for food, a professional sanitary room and so on … Asked what he thought was most needed, Kinfi Tareke wanted a larger dining room, an additional building for other students which had to be rejected. That would cost around $ 20,000. After school, over a hundred children gather in the courtyard, grateful for the colorful balloons and bananas that we brought with us. Everyone gets a third banana, more than that is not enough. To really help the day care, you need real donations. We intend to advertise in Switzerland as well as for the VDI of Terfa Dinka.

Startups and a poet in Lalibela

After three days in Addis we flew to Lalibela, the world famous pilgrimage site with its rock churches. Anyone who comes into contact with the inhabitants here and mentions the name Peter Bachmann immediately looks radiant. You want to know how he is doing and tell about his good deeds, no matter if you’ve benefited yourself or not. The Peter Bachmann Foundation operates and manages over a dozen development and support projects in Lalibela. The local man is Mesay Mekuanent. Together with his staff, he ensures that the donated funds are invested sustainably, ie only in projects that are run professionally and are not abandoned halfway.

A clever idea stood at the beginning of the vegetable garden of the agronomist Zelalem. On a steeply sloping terrain is a public toilet, which was hardly used and therefore closed. 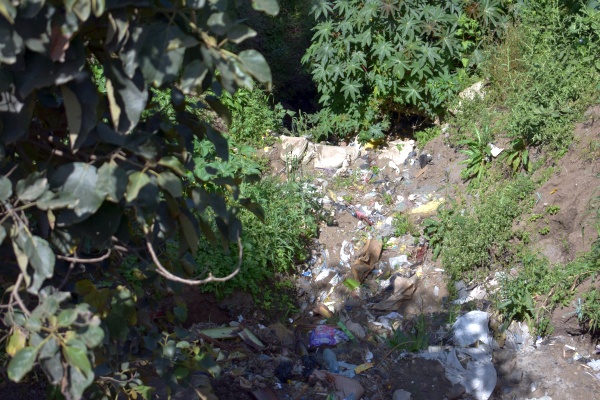 The hillside was neglected and sank to the waste dump. Today, the garbage can only be seen on a narrow strip. The team around Zelalem has turned the land into a vegetable garden! Sandbags are terracing the steep slope, later trees, whose saplings are already visible, take over this job. And in half a year at the latest, Zelalem assures us, he can harvest the first vegetables. 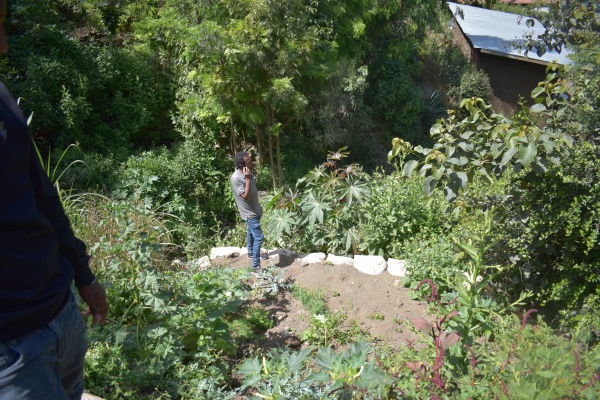 At the edge of the big weekly market we discover an inconspicuous building, which consists of a single room. Here Fikiru Alelebign works that his country does not miss the connection to the IT age.  At about ten tables, two young men sit in front of a screen and learn a programming language with the help of manuals. The mood is concentrated, the students are hardly distracted by the visitors. Fikiru is a passionate teacher, he proudly explains how his IT workshop works, and thanked the laptop for at least three e-mails. 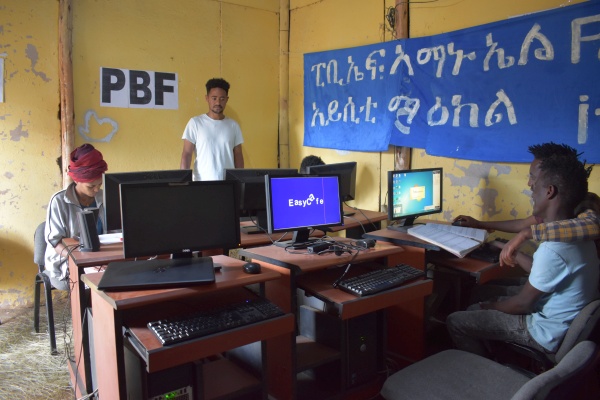 We want to visit more places in and around Lalibela, where the work of the Peter Bachmann Foundation becomes visible. It is only enough for just under half. Very famous in Lalibela is the Ammanuel Village, consisting of a group of about 30 green painted homes that the PBF built a few years ago.

Almost charming is the car or better Tuktuk car wash, which is run by young men who until recently as street children have led a hopeless existence. 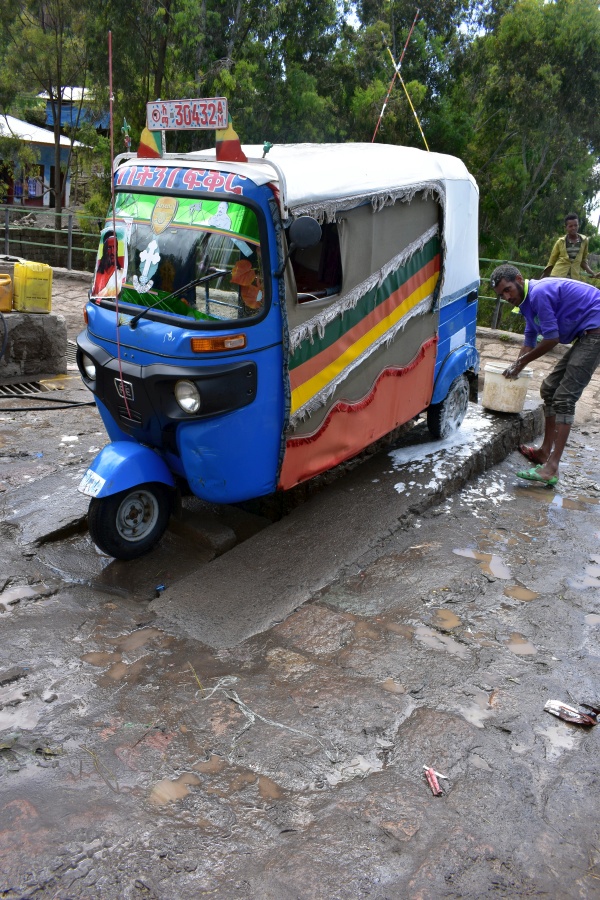 Just outside we visit a component factory. The building consists of a large roof without walls; The plant consists of two machines used to produce cement bricks.

Near a school, not far from the airport, the PBF Foundation has seized a source of water to provide drinking water to more than 1,500 people.

And just before we say goodbye to Lalibela, we meet Solomon Molla, an author who wants to publish his first volume of poetry. He gives us some samples, in Amharic, we do not understand a word, but the sound of the language and the fire of his talk have something magical. Our Amharic teacher in Zurich has meanwhile translated one of the poems; the result confirms our assumption: we met a poet! On the very same day, Peter Bachmann sends the young poet the missing money so that he can sell and give away his poems as a book at Christmas – just as he promised the local patrons.